Why Lengthy Business Plans Increase The Risk Of Failure

Why Lengthy Business Plans Increase The Risk Of Failure

Business plans are great for execution challenges like building a new factory or expanding your sales force. However, insisting on a business plan when it comes to innovation and new ventures is a terrible idea. In fact, lengthy business plans often increase the risk of failure. Let me explain and offer an alternative. 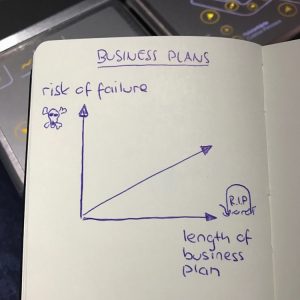 Have you ever written a business plan to convince your bosses or investors about the value of an idea? If yes, think back to what you’ve done. You probably tried to explain why your idea was a good one by quoting market studies; you probably showed off spreadsheets with bold revenue projections; and you outlined how you would implement the idea. Not good! So why is this bad you might be asking? How could writing a detailed and thought-through business plan possibly increase the risk of failure?

Put simply: ideas–however smart they may seem–never turn out the way you initially thought they would. Steve Blank, the initiator of the Lean Startup movement, likes to say “no business plan survives first contact with customers”. But why does that make detailed business plans risky? For starters, once you “sell” a business plan to management or investors, they essentially “buy” your plan and expect you to implement it–even if your plan turns out to be wrong, which is mostly the case for new ventures. Second: when you’ve put a lot of work into a long and refined document, you are less likely to throw the entire thing away; pivot, and explore new avenues to turn your initial idea into a business.

So what’s the alternative? Follow the advice of Michael Schrage of MIT. Schrage says that “a testable idea is better than a good idea”. Rather than write a lengthy business plan you should test and iterate your idea quickly; until you’ve found sufficient evidence for a value proposition that customers want, and a profitable and scalable business model. Here are the steps to follow:

I’m strictly against lengthy and refined business plans at the early stages of a venture because they make pure fantasies look like a good and feasible idea. True risk reduction comes from testing and iterating an idea until you’ve figured out how to make it work. Once you’ve figured that out, you could then start to write a business plan. 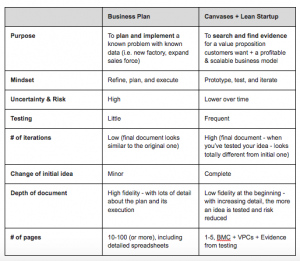 Added on February 7, 2017 by Alexander Osterwalder.